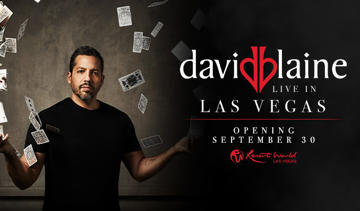 Lowest Price Guaranteed: If you purchase your David Blaine tickets via the following ticket link and later find a better price for the seats purchased, the competitor’s price will be matched and the difference will be refunded. That’s customer care you can count on.

David Blain became a household name when his TV special David Blaine: Street Magic premiered in 1997. The production was said to ‘break new ground’ by Penn & Teller, and it paved the way for other magicians like Michael Carbonaro.

Blaine moved into the extreme stunts as his career moved forward, with his first major televised feat being in 1999 with he was buried alive for seven days inside a plastic box under a 3-ton, water-filled tank.

Other notable stunts include being completely submerged in water for seven days, suspended in a plexiglass box for 44 days with no food, and being encased in a block of ice for over 63 hours.

His residency at Resorts World highlights both his artistry of illusions and his limit-pushing stunts for the ultimate live David Blaine experience.