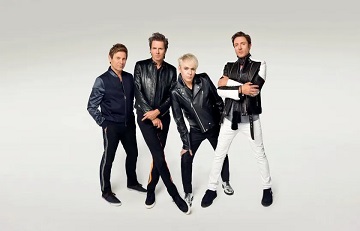 Thu, Sep 01, 2022 • 8:00 PM at Encore Theater at the Wynn, Las Vegas, NV | Duran Duran, a British new wave band, was formed in the late 1970s in Birmingham, England. During their 40-year career, the band has released a number of hits. One of the most important rock bands of the ’80s, Duran Duran was known for combining fashion, music and video in their entertaining package. They are known for their fashionable and refined image. In fact, you could argue that the existence of the music video is one of the driving forces behind their rise to fame. They charted in the UK with their first album and haven’t looked back since. Today, they still tour the United States and could be coming to a venue near you soon.

The rise of Duran Duran coincided almost perfectly with the rise of the world’s first 24-hour music channel, MTV. This was the first time people had constant access to music videos created by their favorite artists and Duran Duran took full advantage of this. To this day, their video for “Hungry Like the Wolf” is mentioned as one of the greatest music videos of all time. The band realized the importance of quality music videos early in their career, and that is why they sought to hire the best filmmakers possible to direct their videos, setting them apart from the rest of the pack when it came to quality.

Preferred and sold out tickets available on Stubhub. Stubhub third party tickets may be above face value to obtain preferred and sold out seating. Preferred tickets currently available on Stubhub from $254 + taxes and fees (Stubhub ticket pricing fluctuates in real time). This website is an affiliate website of Stubhub with incentive to promote Stubhub tickets, although we do not endorse Stubhub or any other ticket processor. Stubhub offers our website visitors direct pricing with no extra fees or charges.