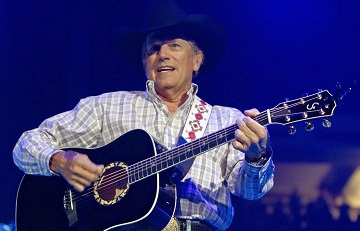 Dec 2nd & 3rd, 2022 8:00 PM at T-Mobile Arena, Las Vegas | Academy of Country Music Artist of the Decade George Strait has also been inducted into the Country Music Hall of Fame. He won the Country Music Association’s Entertainer of the Year Award in 1989, 1990, 2013 and 2014, proving his consistency as a live performer over the decades. George Strait’s “God And Country Music,” performed at the 2019 ACM Awards, was released as a track on his 2019 Honky Tonk Time Machine album. The influential neo-traditional recording artist, born in Poteet, Texas, in 1952, grew up on his dad’s 2,000-acre cattle ranch. After serving in the United States Army 82nd Airborne Division, George’s “Unwound” rose to No. 6 on the Billboard Hot Country Chart, kicking off a legendary career.

An unmatched performer, George Strait broke Conway Twitty’s record for the most No. 1 hit singles in 2009 with 44, which has since increased to 60. George Strait is the only recording artist to have No. 1 single songs on Billboard’s Top 10 chart for each of 30 years. Holding the record for the most No. 1 country albums and singles, gold albums, platinum albums and multi-platinum albums, only Elvis Presley and The Beatles released more gold and platinum albums than George Strait when looking across all genres. In 1990, Strait’s “Love Without End, Amen” and his “I’ve Come to Expect It From You” remained at No. 1 for five weeks. He’s the No. 12 best-selling recording artist in American history.

Preferred and sold out tickets available on Stubhub. Stubhub third party tickets may be above face value to obtain preferred and sold out seating. Preferred tickets currently available on Stubhub from $145 + taxes and fees (Stubhub ticket pricing fluctuates in real time). This website is an affiliate website of Stubhub with incentive to promote Stubhub tickets, although we do not endorse Stubhub or any other ticket processor. Stubhub offers our website visitors direct pricing with no extra fees or charges.