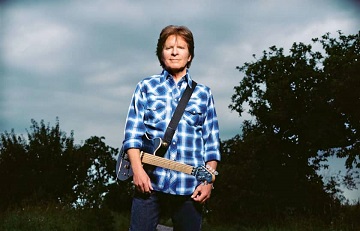 Concert Dates: Oct 06, 09, 10, 13, 15, 16, 2021 • 8:00 PM at Encore Theater at the Wynn, Las Vegas | American songwriter, musician and singer John Fogerty, born in Berkeley, Calif., in 1945, was inducted into the Rock and Roll Hall of Fame in 1993. He formed Creedence Clearwater Rival with Doug Clifford, Stu Cook and Tom Fogerty. John Fogerty, the band’s lead guitarist and singer, wrote the band’s nine Top 10 singles, which earned them eight gold albums from 1968 to 1972. John Fogerty will appear at Woodstock 50, a reunion of those who played at the original Woodstock Rock Festival in 1969 at Watkins Glen, N.Y., from Aug. 16 through Aug. 18, 2019. He will be performing with Country Joe McDonald, Santana, John Sebastian and Canned Heat.

Preferred and sold out tickets available on Stubhub. Stubhub third party tickets may be above face value to obtain preferred and sold out seating. Preferred tickets currently available on Stubhub from $103 + taxes and fees (Stubhub ticket pricing fluctuates in real time). This website is an affiliate website of Stubhub with incentive to promote Stubhub tickets, although we do not endorse Stubhub or any other ticket processor. Stubhub offers our website visitors direct pricing with no extra fees or charges.

John Fogerty is celebrating the 50th Anniversary of “Proud Mary,” “Fortunate Son,” “Who’ll Stop the Rain,” “Born on the Bayou,” and “Bad Moon Rising,” tracks on his Bayou Country album. “Proud Mary,” written just after John’s discharge from the military in 1969, achieved No. 2 on the BillboardTop 10 Chart. “Born on the Bayou” was followed by his Green River album containing “Green River” and “Bad Moon Rising,” also No. 2 on the Top 10 Chart. Fogerty led his band to their Willy and the Poor Boys album with its winning single “Down on the Corner,” a lighthearted No. 3 on the charts. His most famous song, “Fortunate Son,” protesting the Vietnam War, gave voice to the younger generation in their anti-war efforts.

Have You Ever Seen the Rain? - John Fogerty (Creedence Clearwater Revival)