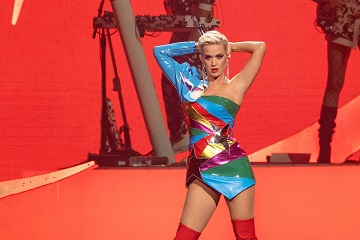 2022 Concert Dates: Jan 14,15, Mar 2,4,5,11,12, 16,18,19 – 8:00pm at The Theatre at Resorts World Las Vegas | Had Katheryn Elizabeth Hudson not opted to take the last name Perry instead of Hudson, the world might have been confused once this American singer became famous. It was only because singer Katy Perry didn’t want to be confused with actress Kate Hudson that she opted to take on her mother’s maiden name of Perry instead of her birth name of Hudson. However, those with very long memories of the singer’s career know that she did release at least one studio album under the name Katy Hudson. The album by the same name came out in 2001. However, Perry didn’t see real fame come along until 2008 when her album One of the Boys dropped. It featured one of her most famous songs, “I Kissed a Girl.” With the release of her third album, Teenage Dream, Perry established herself as a pop icon to be reckoned with. The title track became a huge hit, as did “Firework,” “California Gurls,” “Last Friday Night,” “E.T.” and “The One That Got Away.” Perry loves to interact with her fans on social media and boasts more than 100 million followers on Twitter.

Preferred tickets currently available on Stubhub from $74 + taxes and fees (Stubhub ticket pricing fluctuates in real time). Stubhub third party tickets may be above face value to obtain preferred and sold out seating. This website is an affiliate website of Stubhub with incentive to promote Stubhub tickets, although we do not endorse Stubhub or any other ticket processor. Stubhub offers our website visitors their lowest Stubhub website direct pricing with no extra fees or charges.