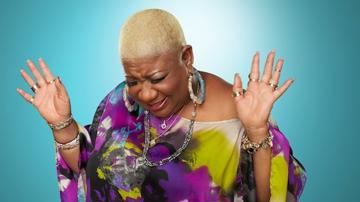 From $19 + Taxes & Fees – Lowest Price Guaranteed | Luenell performs stand up Sunday & Monday nights 9:30PM at Jimmy Kimmel Comedy Club @The LINQ Promenade – View the complete Jimmy Kimmel’s Comedy Club schedule  | From encyclopediaofarkansas.net : Luenell, who goes by only her first name professionally, is a comedian and a film and television actress known for her appearances in such movies as Borat: Cultural Learning of America for Make Benefit Glorious Nation of Kazakhstan (2006) and Hotel Transylvania (2012). She was inducted into the Arkansas Black Hall of Fame in 2015.

The prodigal son has returned! **trumpets blair** Well, sort of. Jimmy Kimmel’s Comedy Club at The LINQ Promenade is the place to be for household names and up-and-coming talent in the comedy world, even if the big guy himself isn’t in the building.

Ladies and gentlemen, we’re going to share some not-so-breaking new: Jimmy Kimmel is from Las Vegas. Yes, you read that correctly, he may be big-timing it up in Hollywood now, but he was raised beneath the buzzing neon of the Strip, baby. And he’s come home to pay it forward with his own comedy club. But he’s not just slapping his name on the building and calling it a day. Because he got his start as a comic, he knows what it takes to maximize talent. That’s why every inch of this dual-level 8,000 square-foot venue has been personally designed by Kimmel.