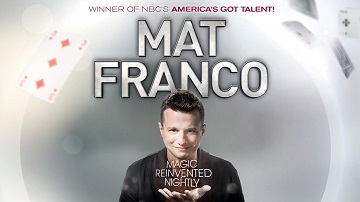 From $62 + Taxes & Fees – Lowest Price Guaranteed | 7PM FRI-WED @Mat Franco Theater, The LINQ | After awing the world with his astounding magic tricks, Mat Franco, season nine winner of NBC’s “America’s Got Talent,” has claimed his headlining spot in Vegas at The LINQ Hotel and Casino.

The world fell in love with him and his magic on NBC’s “America’s Got Talent,” and now we’re claiming Mat Franco as our own with his headlining magic show at The LINQ. Winner of season nine, this guy has already proven that he has the mojo to wow a massive audience with his sleight of hand and out-of-this-world magic. Oh, and his charisma just cranks it all up to 11ƒ.

So what are other people saying about Mat Franco? Los Angeles Times says “the magician changing the game” for his acclaimed production. The immersive live show, which Forbes has called “the tops in town” on its list of “The 5 Best Shows To See In Las Vegas Right Now,” leaves audiences awe-struck and amazed with unique feats of illusion “that captivate audience members from 8 to 80,” according to Parade.com.