Event Series: Free Things to Do 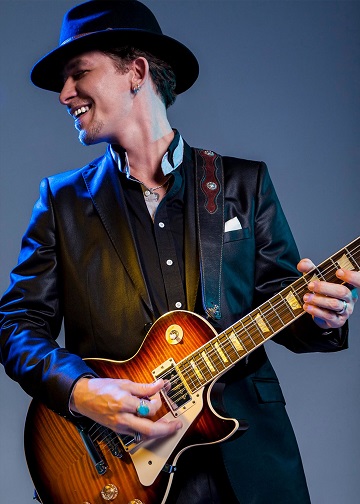 7:30pm on Tuesday nights at Piazza Lounge @Tuscany Suites & Casino | With his soulful voice and earthy, Southern manner, Michael Grimm charmed millions of viewers as a contestant on Season Five of NBC’s popular “America’s Got Talent.” Parlaying his substantial singer-songwriter appeal into a first-place finish, Michael took home the $1 million prize and headlined the first-ever national “America’s Got Talent Tour.” Following that, he toured with the legendary Stevie Nicks and Heart, playing to arenas of 20,000.

In the spring of 2011, Michael debuted his first major label release, the self-titled Michael Grimm. Working with Grammy-award winning producer Don Was (The Rolling Stones, Elton John, B.B.King), Michael released an album that had his fans purchasing it in droves. “Oh, it’s swampy,” he says. “It’s Michael Grimm leaving his hat on. This is me. It’s the way I’ve always been since I was a teenager, wearing hats and singing the music that I love to sing.”

Michael comes by his rootsy bonafides the authentic way, as a true son of the South. From age five, he grew up in Waveland, a small Gulf town in Mississippi that sits between New Orleans and Biloxi. “It’s a very humble, charming town. I loved growing up there,” he says. “My dad was not making any money,” Michael explains, “so my mother cleaned churches to try to pay the bills. We lived in a little camper that had holes in the floor. I remember if you looked straight through the hole in my bedroom floor, you could see the ground underneath. The funny thing is, I thought I had everything in the world. Looking back, all I owned were a few hand-me-down toys, but it didn’t bother me at the time.”

Unable to afford the cost of raising Michael and his sister, his parents gave them over to his grandparents to raise them when he was 5. There, Michael grew up listening to the country artists his grandmother favored: classics like Ernest Tubb, Hank Williams, George Jones and Ray Price. When he was 11, he sang at a wedding. One of the guests heard him and made him an offer. “This guy owned a bar, and he said, ‘I know you’re going on 12, but if you bring a legal guardian and you want to sing a karaoke set here … we can’t pay you anything, but you can put a tip jar down’.” Michael accepted and wound up performing there for the next several years.

When Michael turned 13, he was discovered by Ann McNair, a singer with both Gospel and Nashville roots. She gave him a guitar, showed him the first three chords, and taught him how to write songs. At 15, Ann got Michael his first indie record deal. But “I knew just being a singer wouldn’t put bread on the table. I also needed to be a musician,” he says. So his entire 16th year, while everyone else was outside playing and getting on, he locked himself up in his bedroom and learned how to play his guitar.

At 17, Michael released a single called “John Wayne and Jesus.” With that song, he received the first-ever Country Christian Music Association (CCMA) “Star of Tomorrow” Covenant Award. “I’ll never forget that night at Ryman Auditorium,” he says, the Ryman being the original location of the Grand Ole Opry. “It gives me chills to this day.”

Michael’s hard work paid off when he was hired as a guitarist and back-up vocalist for the live celebrity impersonation show “Legends in Concert” in Biloxi. One night, he heard a woman named Cookie Watkins singing Tina Turner. “I was amazed by her voice,” Michael says. “I fell in love with soul because of Aretha Franklin, but Cookie Watkins is the real reason I sing the way I do. That’s when I switched from country to diving into all these R&B greats like Otis Redding, Sam Cooke, Al Green and Etta James, as well as the blue-eyed soul guys, like the Righteous Brothers, Joe Cocker, Michael McDonald and Daryl Hall.”

At age 21, with his talent turning heads everywhere he went, Michael took a job performing at Las Vegas’ “Legends in Concert” and made the move west, where he’s lived since, working with some of music’s biggest producers and stars. In 2005, his life was changed forever when Hurricane Katrina decimated his hometown of Waveland. “The whole town was flattened by the tidal surge. My grandparents had to move into a FEMA trailer… [then] into another mobile home in the woods. All I wanted to do was find a way to help.”

Enter NBC’s hit show “America’s Got Talent.” In the spring of 2010, Michael auditioned for the show, which debuted in June. “His tremendous talent and genuine emotion over his grandparents’ loss (he promised to build them a home if he won) resonated with 4 million+ viewers. After his roof-raising rendition of “When a Man Loves a Woman,” viewers voted him the winner in the most talent-filled year ever. Instantly a humble, self-taught, fedora-wearing super-star was born.

Following his win and the release of his debut major label CD, Michael turned to the business of live shows, giving back to his fans what they had given to him. Throughout 2011 and 2012, he played venues across America, from California to New York. Among many others, he headlined the Jimmy Rodgers Festival in Meridian, Mississippi, and became the first-ever resident headliner at the popular Ovation Showroom at Green Valley Ranch Resort in Las Vegas.

Michael spent most of 2013 on the road touring the world, including first-time performances in Costa Rica, St. Martin and Shanghai, China.

In 2014, Michael began work on his next album entitled Grimm, which is a collection of brand new original songs written and composed by Michael himself. Production was held at Studio 824 in Las Vegas with the assistance of long time friend and fellow musician Jamie Borden. Grimm was a fan-funded album and released June 15, 2015, during Michael’s headlining summer, limited engagement, residency at Hard Rock Las Vegas. With this album came a new image, a slight rebrand and a new high energy sound that could be experienced live with Michael’s National and International concerts throughout 2015 & 2016.

2019 & 2020 was a busy year for Michael, headlining the prestigious Myron’s Cabaret at Smith Center in Las Vegas, and releasing multiple albums: Tribute to Otis Redding, Encoded (which was written and produced by mentor Bill Medley of the Righteous Brothers), and the long-awaited Christmas album, Sleigh Bells Not Included.

Creativity never stops for Michael as he starts work on a new project during his off time from performing. Michael has lots more in store for his fans, so stay in touch by signing up for Michael’s newsletter or join the interactive fan club for insider scoops.