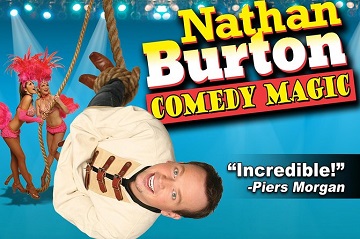 Treat yourself to an afternoon of amazing illusions, beautiful showgirls and laugh-out-loud comedy at Nathan Burton Comedy Magic. Burton’s friendly personality and mind-boggling illusions have continued to captivate audiences since he first started headlining on the Las Vegas Strip in 2001. Before performing in Vegas, Burton was featured on NBC’s “The World’s Wildest Magic” in 1996, where he wowed audiences with his comedy infused magic. The overwhelming response to his performance led to a second appearance the following year on the network’s other magic special, “World’s Greatest Magic 3.” In 2005, Burton was the only featured magician on E! Entertainment’s “The Entertainer,” starring Wayne Newton. Later that same year, he captivated audiences worldwide with his self-contrived “Ultimate Las Vegas Showgirl Challenge” where he spent seven nights inside a sealed box with seven showgirls. Many reality television fans may remember Burton from his appearance as a contestant on the first season of NBC’s “America’s Got Talent.” He didn’t win, but he did accumulate a huge following. Before the show starts, a film clip from Burton’s “America’s Got Talent” appearance is played on screens hanging on both sides of the stage. Watching the video is an instant reminder of Burton’s magical talents. He uses an array of funny props, paired with his quick-witted comedy to both amuse and mystify the audience. Dynamic lighting, contemporary music and inventive set pieces designed by Andy Walmsley, who has also designed sets for “American Idol,” and “America’s Got Talent,” make each new illusion more electrifying than the next. The show also features Russ Merlin, a seasoned Vegas entertainer who has performed in “V-The Ultimate Variety Show” in the V Theater in the Miracle Mile Shops at Planet Hollywood. Merlin’s unique brand of comedy combines volunteers from the audience with masks to create a hilarious scenario on stage. Burton’s casual and comical style, along with his string of awe-inspiring illusions, create a fun and exhilarating afternoon show that the whole family can enjoy.