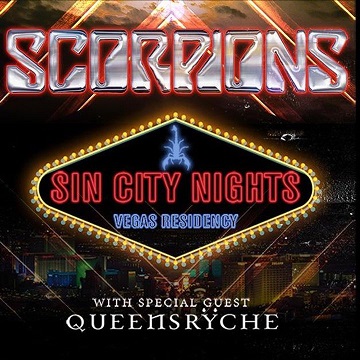 Heavy metal band the Scorpions with Queensrÿche are at Zappos Theater at Planet Hollywood Las Vegas.

German hard rock band the Scorpions was part of the first wave of metal bands in the 1970s, but it wasn’t until the 1980s that they hit it big in America. “Blackout” in 1982 was their breakthrough album here in the United States and went on to become one of the biggest attractions in the 1980s heavy metal scene, scoring several radio hits.

Throughout the ’80s the Scorpions amassed multiple Top 10 singles including “Rock You Like a Hurricane” and “No One Like You,” as well a string of successful singles such as “Send Me an Angel” and “Still Loving You.”

Just when the Scorpions’ popularity seemed as if it might come to an end, the band came back with their biggest hit yet in 1990, “Winds Of Change,” a power ballad that capitalized on the fall of the Berlin Wall.

The band was ranked No. 46 on VH1’s Greatest Artists of Hard Rock and their hit “Rock You Like a Hurricane” also landed as No. 18 on VH1’s list of the 100 Greatest Hard Rock Songs. The group has sold more than 100 million albums worldwide, and have received multiple honors including a World Music Award. In September 2015, the Scorpions released their 19th studio album, “Return To Forever.” It was also the same year the band celebrated their 50th anniversary.

Joining the Scorpions will be progressive metal band Queensrÿche.

Queensrÿche broke through to the mainstream with its 1988 concept album, “Operation: Mindcrime.” The ambitious album tells the story of a fortune hunter whose disillusionment with Reagan-era American society leads him to join a shadowy plot to assassinate corrupt leaders.

The hits “Eyes of a Stranger” and “I Don’t Believe in Love,” on the album “Mindcrime,” became hits for the band and some of the most praised metal efforts of the ’80s.

Queensrÿche, however, saw its biggest success in 1990, and sold two million copies of its album “Empire” due to the success of “Silent Lucidity,” which earned multiple Grammy Award nominations and won the MTV Viewer’s Choice Award.