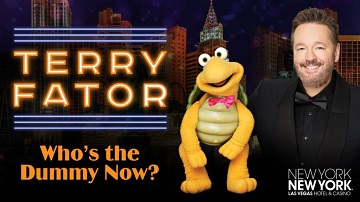 Terry Fator may just be the greatest illusionist on the Las Vegas Strip, but you’ll never see him perform any magic tricks. He amazes audiences by singing like famous entertainers from Elvis to Cher without moving his lips, and that’s not all. Along with being a singer and a celebrity impressionist, Fator is a puppeteer. His face may not move much during his show, but his hands are always in action, bringing to life his cast of lovable puppet co-stars.

A multitalented performer, Fator got his big break when he won NBC’s “America’s Got Talent” in 2007. Fator won $1 million and a gig to perform on the Strip. Since 2008 hundreds of thousands of tourists have seen Fator’s show. Aside from Vegas, Fator has been featured on “The Today Show,” “The Oprah Winfrey Show,” “The Ellen DeGeneres Show” and “The Late Show with David Letterman.”

And don’t forget to ring in the holiday season with “A Very Terry Christmas,” the famed ventriloquist’s delightfully funny seasonal special that begins at the end of November. His adorable cast of characters are decked out in santa hats and other holiday costumes to perform your favorite Christmas songs as well as original music created by Terry Fator himself.