An event every week that begins at 8:00 pm on Tuesday and Wednesday, repeating until July 6, 2022 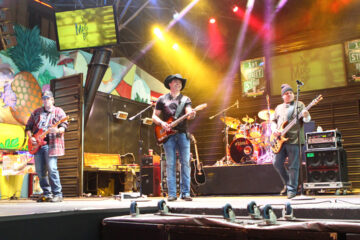 COUNTRY MUSIC WITH A ROCKIN’ TWIST

The Tony Marques Band ranks at the top when it comes to Las Vegas’ premier country bands. The attention the band has received has come quickly since being revamped in February of 2013. The incredible musicianship, smooth three-part harmonies, energetic and crowd interactive shows, have people talking, venues calling and crowds wanting more. These key ingredients come together to create the perfect blend of today’s country music.

Heading up the band, Tony Marques has been deeply rooted in country music since he started performing over twenty years ago. His rich tenor vocals lend itself to the country genre without a doubt. Tony has opened for some of today’s biggest country stars including, Jason Aldean, Billy Currington, Gary Allan, and Charlie Daniels, just to name a few.

Fellow band members: Tommy Cameron (Lead Guitar & Vocals), Michael Angelo (Drums & Percussion), and Mike Riojas (Bass & Vocals), come from backgrounds consisting of a rock, pop, and R & B. This adds the edge you hear in the bands live shows. TMB perform songs by Luke Bryan, Florida Georgia Line, Jason Aldean, Zac Brown Band, Brantley Gilbert, Dierks Bentley, Thomas Rhett, Kenny Chesney, Brad Paisley and many many more. Even though the band stays current, they never forget where it all started by paying tribute with a few Johnny Cash classics along with a few other country icons. The depth of the bands song selection runs deep. With this arsenal in their back pocket, the TMB can step outside the box and perform songs by John Cougar, Lynryd Skynyd, Def Leppard, Bon Jovi and other favorites when the venue and the crowd calls for it.