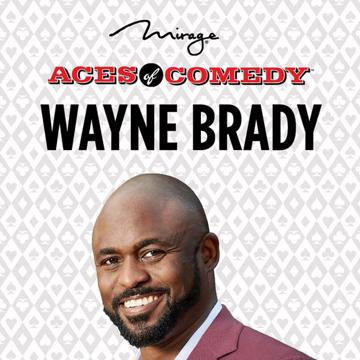 From $67 + taxes & fees – Lowest Price Guaranteed | 2022 Dates: Jun 18, Sep 10 shows at 10:00PM @Mirage Hotel & Casino | Comedian Wayne Brady will be joining the Aces of Comedy lineup at the Mirage this summer to entertain audiences with his hilarious brand of stand up comedy.

He dances. He acts. He makes you laugh hysterically. He’s able to leap tall buildings in a single bound. Well, maybe he’s not actually Superman, but Wayne Brady is one of the hardest working multitalented performers in the entertainment business and he manages to work dancing, sketch and improv comedy all into his 90-minute show.

But comedy is not all he has achieved. In his impressive career, Brady has released two albums, “Radio Wayne” and “A Long Time Coming” on top of winning a Primetime Emmy Award for Outstanding Individual Performance in a Variety, Musical or Comedy Series for his work on “Whose Line Is It Anyway” as well as four Daytime Emmy Awards for “The Wayne Brady Show.”

While Brady may be best known for his work on “Whose Line Is It Anyway?,” he has also hosted two games shows, “Let’s Make a Deal” and “Don’t Forget the Lyrics!,” and has appeared on other popular shows including “Drew Carey’s Improv-A-Ganza,” “Chappelle’s Show” and “How I Met Your Mother.”

Whether it’s impersonating or rapid-fire entertainment, Brady delivers his side-splitting stand-up and improvisational comedy at a rate enviable of superheroes.