An event every week that begins at 10:00 pm on Sunday, Monday, Thursday, Friday and Saturday, repeating until February 6, 2022 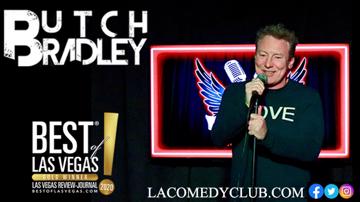 36% Off Tickets, Select Tickets: Regular $, Sale Price $30 + Taxes & Fees – Lowest Price Guaranteed | As longtime friend of Bradley, Tiffany Haddish says, “Butch Bradley always makes me laugh. Even when I was homeless, sad and found nothing funny, he always found a way to make me pee on myself a little. (From laughing so hard and that’s it!)”. | 10pm shows Thursday- Monday 10pm at LA Comedy Club inside The Strat Casino

Veteran comedian, Butch Bradley has taken his unique blend of stand-up and improv around the globe; from small clubs to big casinos, feature films to late-night television, to active war zones in the Middle East for USO venues. A true “comic’s comic,” Bradley’s longevity and popularity come from his insightful, always freshcomedic material. Eternally casting his wry observational net over day-to-day existence, his comedy is in a constant state of metamorphosis. Bradley’s humor is upbeat, often manic, provocative but never malicious; his observations can come totally out of left field yet they ring true. It’s the almost- painful honesty the audience is responding to when they laugh uproariously, not the shtick. Bradley doesn’t so much deliver jokes as he takes his audience by the hand and leads them on a hilariously madcap ride, a ride that no one ever wishes will come to an end.

As longtime friend of Bradley, Tiffany Haddish says, “Butch Bradley always makes me laugh. Even when I was homeless, sad and found nothing funny, he always found a way to make me pee on myself a little. (From laughing so hard and that’s it!)”.

Named Best Comedian 2020 by “Best of Las Vegas”, Bradley will next be seen in his first highly anticipated standup special, which will be widely available across streaming platforms. In film, he was most recently seen in The Opening Act starring Bill Burr, Cedric The Entertainer and Neal Brennan, and next will next appear in the biopic Reagan, starring Dennis Quaid, set to be released in 2022.

Having lived the nomadic life of a successful comedian for much of his professional life, Bradley has recently settled into a residency headlining at The STRAT Hotel, Casino & Skypod, called “Butch Bradley & Friends.” And while revenue is down at the comedy venues on the Strip due to COVID, Butch Bradley, the immensely likeable guy who is first and foremost a storyteller and an acute observer of human nature and all its foibles, is selling out nightly. In honor of those who have put themselves at most risk to help us through the pandemic, Bradley is welcoming free shows for all First Responders.

Bradley began his comedy career as a founding member of the Boston Improv Troupe and soon became the opening act for such luminary comics as Ray Romano, Lewis Black and Cathy Ladman. Soon after Bradley was appearing on HBO and Comedy Central and as a popular regular on The Late Late Show.

Bradley comes by his humor naturally; he was born into a family of irrepressible storytellers and grew up in the environs of Atlantic City, New Jersey when the classic comedic legends—Don Rickles, Rodney Dangerfield, George Carlin and Shecky Greene—were strutting their stand-up stuff near the boardwalk. The child of a single mother who worked her way up from a waitress to a casino manager, young Butch and his little brother were plopped into high-backed booths so they, too, could enjoy the show. Early on, Bradley may not have fully understood the jokes, but he certainly understood the transformative power of laughter as he bore witness to audience after audience convulsed with mirth.

Bradley has also toured extensively at festivals, such as the Aspen Rooftop Comedy Festival and the Montreal Just for Laughs Comedy Festival, but it’s his appearances as a USO entertainer that means the most to the comedian. Taking a page from Bob Hope’s famouslyaltruistic book, Bradley has traveled to Afghanistan six times and twice to Iraq to entertain the troops.

In Bradley’s special world, you give thanks, you pay it forward, you give credit where credit is due, be grateful for what you have, be glad for the opportunity to do what you love to do and laugh whenever you can. Simple but profound.

As comic, actor, and comedy club owner Brad Garret says about Bradley, “From the first time I watched Butch Bradley headline my club in Las Vegas, I realized 2 things. One, I really don’t want to follow him, and two, he’s truly a force of comedic brilliance. Even more now, I fear the Irish.”

Comedy Dynamics is releasing Bradley’s first stand up special “Butch Bradley: From Las Vegas” on March 16, 2021 on all media platforms. And knowing Butch, is probably just the beginning.